Chocolate Chick Pea Calzoni aka Calzoni di Ceci is a special southern Italian treat, made during the Christmas period. This particular holiday tradition, which has its roots in Muro Lucano (my husband’s home city!), keeps the spirit of Italy alive and cherished in Montreal. 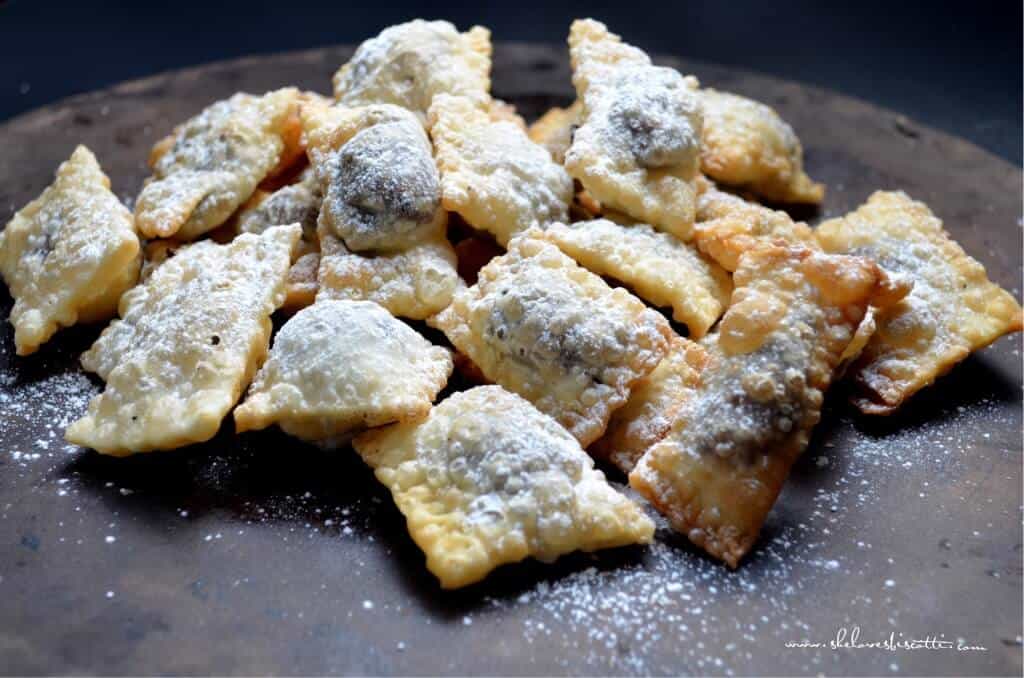 I love traditions, especially when they are in the shape of these Calzoni di Ceci.

Following the passing of my mom, I think I finally understood and truly appreciated the importance of keeping family traditions alive.

Traditions are not just around to provide us with a link to the past; they are vehicles for eliciting and re-enacting special memories of time spent with loved ones.

My sister-in-law called me last Friday evening with an invitation I could not refuse.

She was planning to make her calzoni. The filling was to be made on Saturday and the montage of the calzones on Sunday.

Thank goodness for her persistence! The wheels were set in motion… I was super excited! That evening as I feel asleep, my last thoughts were of chocolate-covered chickpeas (ceci is chickpea in Italian)… sweet dreams indeed!

My sister-in-law was already up and waiting for me the next morning. She informed me that her daughter would also be participating in this event.

I was super charged and super excited!

We began gathering the ingredients and in walked my lovely niece, along with one of her sons. As we weighed and measured and discussed all the ingredients that went into the filling, the doorbell rang and in walked yet another relative, not to make calzoni, but just passing by to give his best wishes for Christmas.

At that particular moment, it was as though I had a vision of Christmas past.

I remember family and friends dropping by my parents’ house just to have an espresso and whatever my mom was pulling out of the oven.

The conversation was never hurried, it was always in the moment, like it was this Saturday morning.

Today, the conversation had a tone of appreciation and respect… and I was reminded once again of all the effort our mothers and grandmothers made to have everyone gathered around the table, just enjoying a simple conversation and simple food.

Making the filling was a relatively short process so I left Angelina’s house with the intention of making my own version of the filling as soon as I got home, incorporating some ideas I wanted to try out.

Unlike my sister-in-law, for instance, I was going to use my handy food processor to blenderize all of the ingredients together, in order to obtain a filling with a silky, chocolaty, smooth consistency.

Day 2: The dough and the assembly line

The next morning, I had a rendez-vous at Angelina’s house to complete the process. My daughter wanted to come too. And so, early Sunday morning, off we went!

The first order of the day was getting my sister-in-law’s approval for the little modifications I made to the filling.

Essentially, I used only rum (she used a combination of rum, and whatever other liquor she had on hand). I added a pinch of salt and a tiny bit of lemon juice; and I used a food processor to blenderize everything together instead of using a food mill. (Note to self: I will add a little cinnamon next year). Once it passed the taste test, we began weighing the ingredients for the dough.

Five minutes after I walked in the door, my niece, Angelina’s daughter, came in yet again through the back door, this time with two of her sons by her side and armed with  her stand mixer.

It had been established during the conversation from the day before that we were going to bring these Chocolate Chick Pea Calzoni aka Calzoni di Ceci, into the 21st century.

We had a lot of calzoni to make – and when I say a lot, I mean approximately 700 – this is some serious calzoni making!

Instead of kneading the dough by hand, we were going to use the stand mixer.

The dough comes together in no time at all. Once you measure out the flour, you add equal amounts of oil, white wine and water. That’s it. We let the dough sit for at least 30 minutes, and in the meanwhile, we prepared the work stations.

During this preparation, more reinforcements walked in through the door. This time they took on the shape of Angelina’s daughter-in-law (armed with Tim Horton’s coffee!), and three of her small grandchildren. After some quick catching up, we returned to the business of making the calzoni. 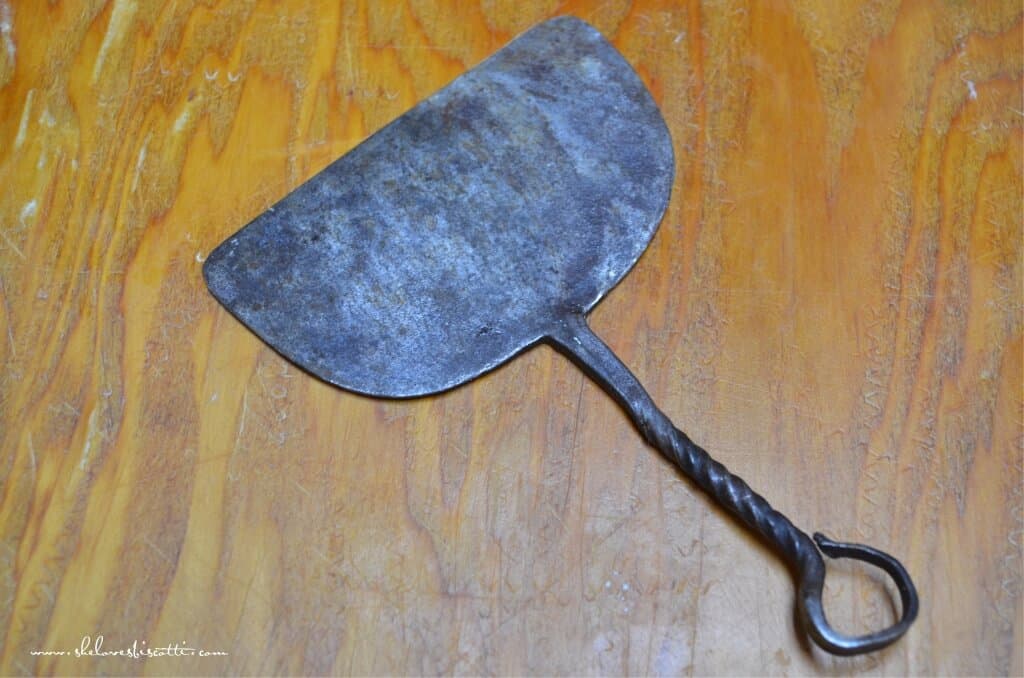 My sister-in-law showed us the pastry cutter with which her great-grandmother Felicia used to make the same calzoni di ceci over 100 years ago. She only takes it out of storage to make these little gems. We nicknamed this rustic pastry cutter Felicia.

In the process, another generation learned of pastry cutting techniques of a hundred years ago.

At this point, the dough needed to be rolled out. You can use a rolling pin, but we used a pasta roller.  Start at level 1 and work your way up to level 4. The higher the number, the thinner the dough.

We are half way through this process and thank goodness, the reinforcements just keep coming, this time they were in the form of one of Angelina’s sons, his wife, and his daughter.

Of course, Angelina’s husband was also around, which means that at this point, we reached a total of 14 people, making calzoni together. The more the merrier, that’s what I say!

At this point, it’s just a matter of filling them up, covering them with another sheet of dough. 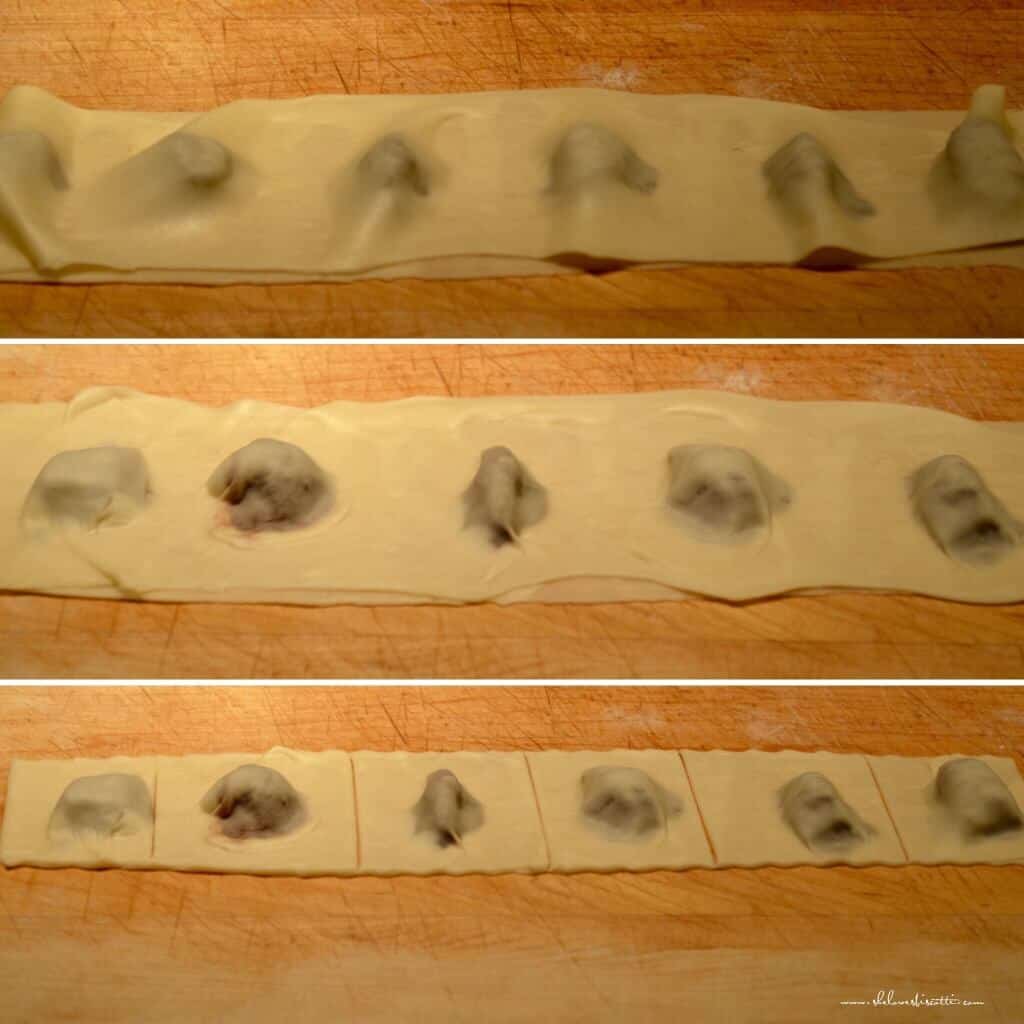 …and repeat the whole process, a couple of hundred times.

It’s important not to have any air bubbles inside the wrapper as this might cause the wrapper to open allowing the filling to escape into the oil (when deep frying) and making a mess.  Oh, and you need to make a little indentation on the top. 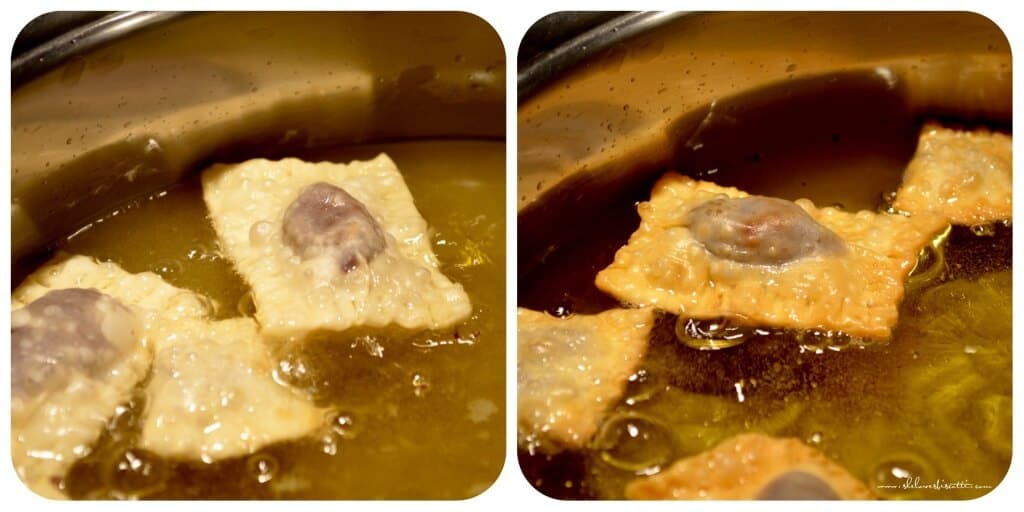 Here is the quick dip in the fryer.

If you know me you know that I am not a fan of frying, but this is once a year and it’s tradition!

UPDATE: Since posting this recipe, I have tried making an air fryer version. The results for these chestnut Caggionetti are amazing!

A couple of minutes in the fryer and they are done. Just before serving you can sprinkle your calzoni di ceci with either icing sugar or granulated sugar. The dough is super crisp, not soggy at all. It reminds me of a thinner version of the shell of an egg roll. 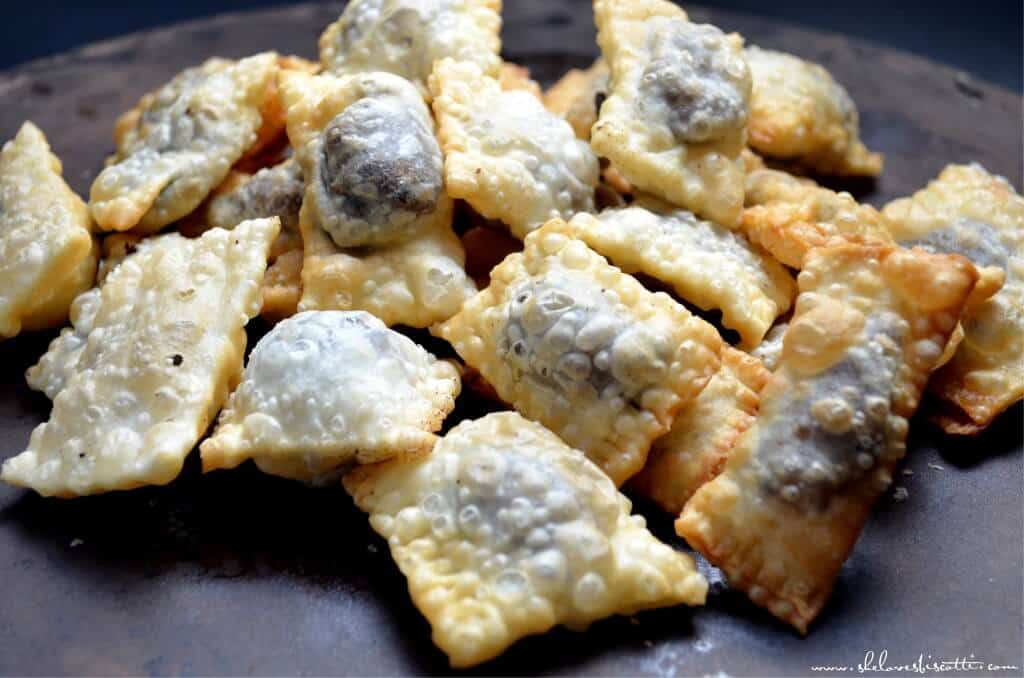 As I have previously mentioned, this recipe has its origin from Muro Lucano, in the Italian region of Basilicata, in the province of Potenza. A truly beautiful area of Italy. That is where my husband and his family grew up before immigrating to Montreal.

I had an absolutely magical weekend making these sweet calzoni… after all this is what Christmas is all about, spending time with the ones that mean the most to you! 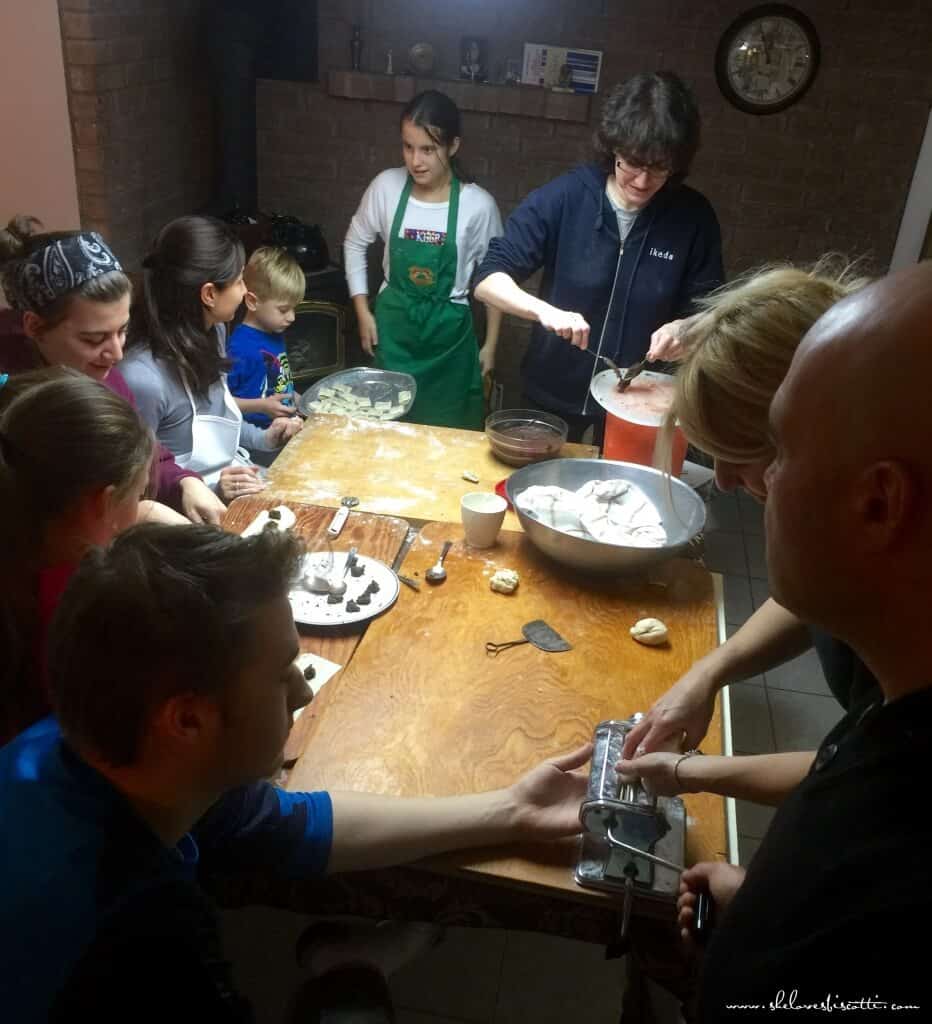 Wishing all of you a very Merry Christmas, a Joyeux Noel and magical moments with the ones that you love!

★★★★★ If you have made these Chocolate Chickpeas Calzoni Cookies, I would love to hear about it in the comments below and be sure to rate the recipe! 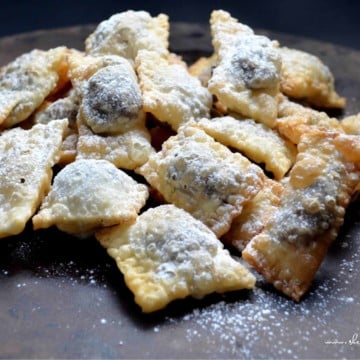 Active prep time is approximately 4 hours. Since the filling needs to stay in the fridge for the flavors to blend, you can calculate the idle time to be at least 12 hours.
The filling can be adapted to your own taste...Angelina adapted the recipe by eliminating cinnamon and adding nutella. I will try adding the cinnamon the next time I make them...do not think I will keep the addition of lemon juice...come back next year, when I will try yet another variation. Please keep in mind that the nutritional information provided below is just a rough estimate and variations can occur depending on the specific ingredients used.

Thanks for dropping by, 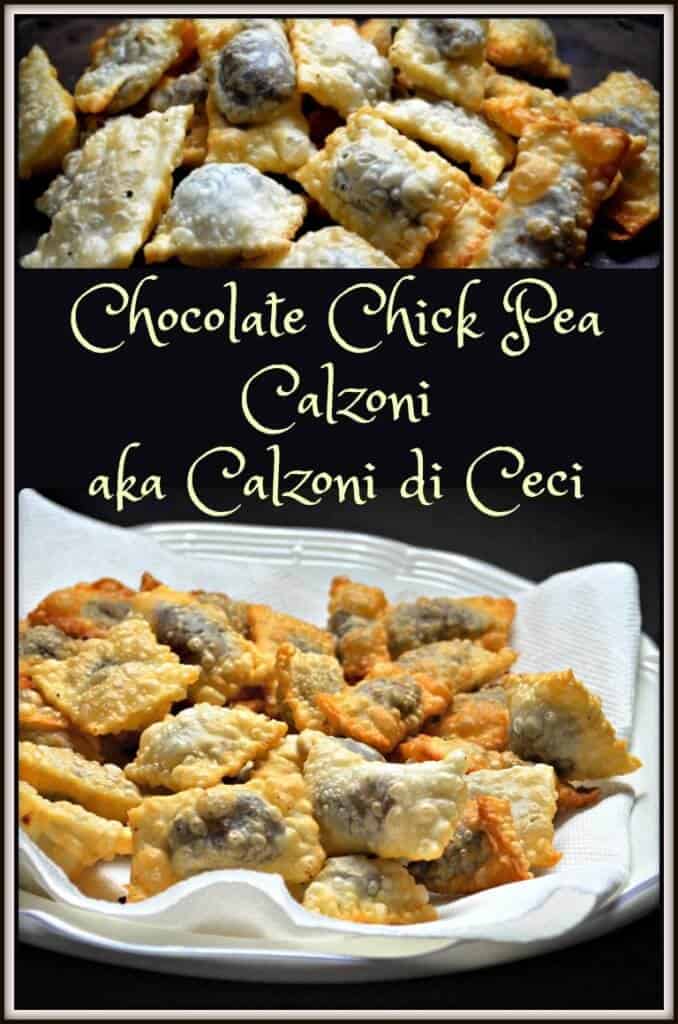