June 29th is National Waffle Iron Day, and who am I to ignore a holiday? I’ll be whipping up these Breakfast Poutine Waffles on the 29th, and I thought I’d share the recipe with all of you so that you can do the same. 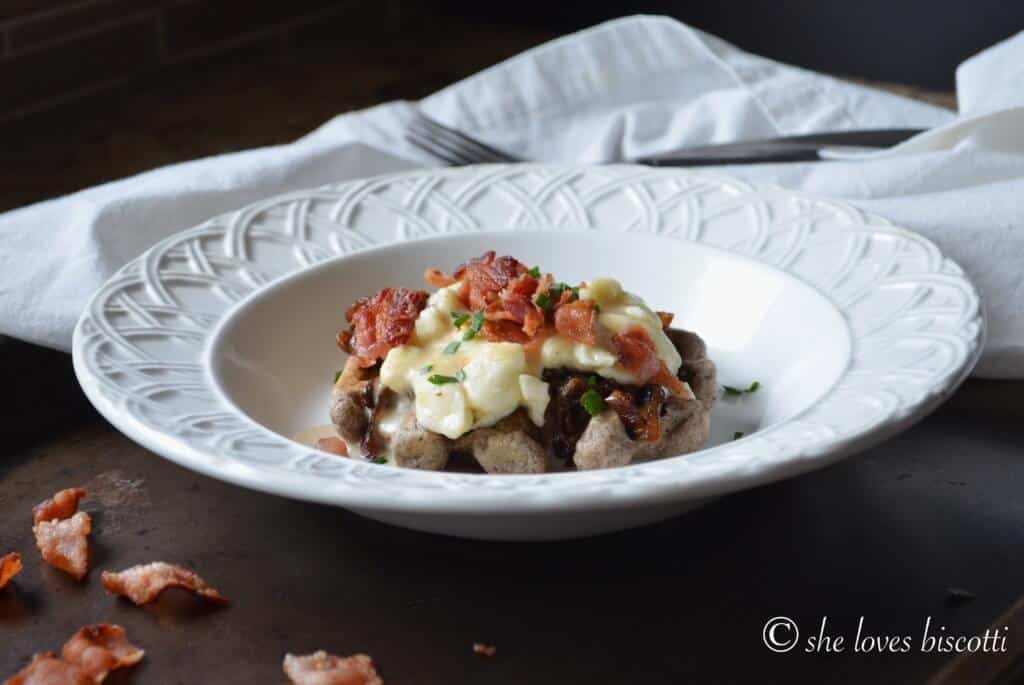 But I thought that National Waffle Iron Day merited something a little special. I decided to try using waffles in a way I never had before – as a base for this Breakfast Poutine  🙂

But maybe the readers who are not native Montrealers are scratching their heads right now, asking, “What on earth is a poutine?” Poutine – pronounced poo-TSIN – is a Canadian (or more specifically, Québécois) fast food dish, which traditionally consists of French fries, cheese curds, and hot gravy poured over the lot, softening the cheese. Yes, yes, I know … but I believe in moderation, so go easy on the gravy 🙂

During PoutineFest, a summertime festival in Montreal, restaurants, food trucks, and the like put together unique combinations of poutine. I thought this recipe for Breakfast Poutine Waffles was the best of both worlds!

My Breakfast Poutine Waffles vary from the traditional poutine in a few ways. For starters, I didn’t use fries, or potatoes at all – I used a buckwheat waffle as my base, instead. Waffles are naturally pretty sweet, even when they are enjoyed plain, but buckwheat waffles have a rich nutty flavor – makes them perfect for this dish!

Then, instead of hot gravy, I used a warm cream sauce. To be honest, I tried out this recipe with Hollandaise sauce at first… but it flopped. It turned out so thick, and I just can’t understand why! If I had held the bowl holding it upside-down, nothing would have fallen out, ha. But it’s okay – this cream sauce tastes great, too, so all’s well that ends well 🙂 I’ll definitely give Hollandaise sauce another try in the future, and maybe share with you that recipe when I master it. But until then, I thought that maybe my kitchen-failures would amuse some readers anyway! 🙂

A good poutine traditionally calls for cheese curds, which must always be squeaky. In fact, the squeakiness ensures freshness. Cheese curds can be kept at room temperature for a period of 24 hours post manufacturing date. After the 24 hours, the curds need to be refrigerated. In Quebec, fresh cheese curds are easily available. To be honest, I can’t quite imagine poutine without the cheese curds, so this recipe for Breakfast Poutine Waffles holds on to them.

I also added some bacon, and some caramelized onions, because I thought the flavors would balance each other nicely. Bacon is smokey, crispy, and salty, and caramelized onions are soft, squishy, and sweet – a match made in heaven. 🙂 I would like to stress, though, that this recipe is super customizable. I mean, once you make the waffles, all that you need to do is place all of the other ingredients on top, and pour the sauce of your choosing (cream sauce or Hollandaise sauce or something else) over the lot. Try it out with sausages, salmon, scrambled eggs, sauteed mushrooms, roasted red peppers, steamed asparagus, etc… You can even play with the kind of waffle you use, or, if you prefer, can skip the waffle altogether and go for breakfast potatoes as a base instead… but I really don’t understand why you would do that! And on National Waffle Iron Day, to boot?! Blasphemy. But jokes aside, it really is all up to you! Don’t you love the creative freedom? 😉

Origins of the recipe for Breakfast Poutine Waffles:

My daughter tells me that she still remembers the first time she tried a poutine, ever. It was around the time when my son had gotten his first job, and had some spending money for the first time ever. One day, he came home with a poutine for himself, because he had “always wanted to try it”. He let my daughter sample some. Both of them agreed that they didn’t much like it, but my daughter has since eaten her words (she’s also eaten much, much more poutine since then. Haha.) This recipe was her idea, and I decided to go with it – I thought it would be a fun project for the two of us, and a great way to celebrate PoutineFest, National Waffle Iron Day and the Sunday Supper theme in our own way.

Be creative with this recipe for Breakfast Poutine Waffles! Let me know what kind of combinations you try, and how well you like them. 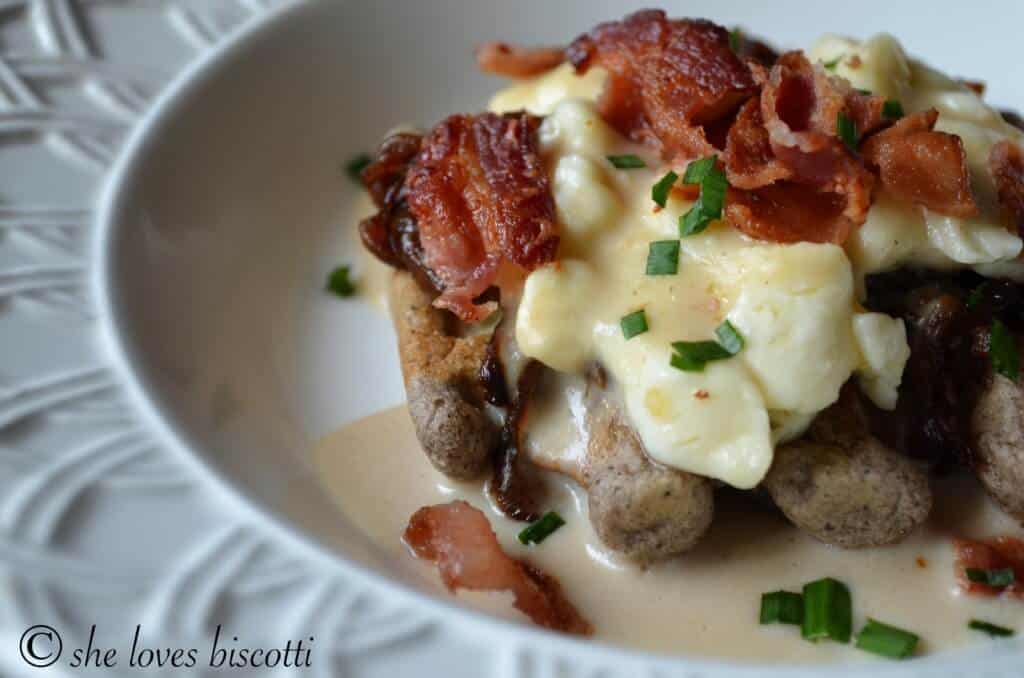 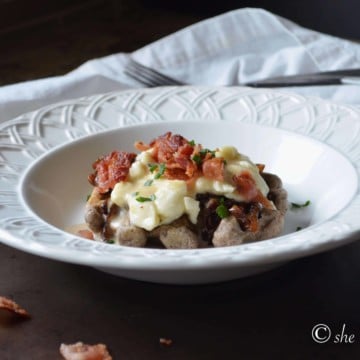 Please keep in mind that the nutritional information provided below is just a rough estimate and variations can occur depending on the specific ingredients used.

Thanks for dropping by. 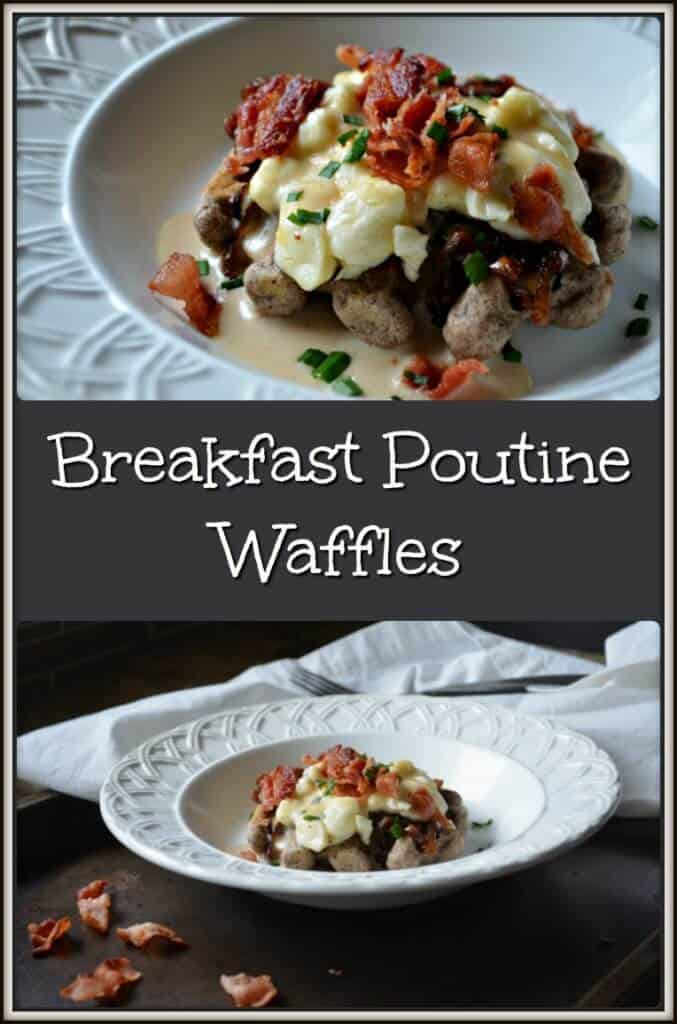