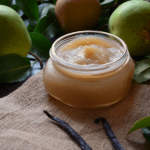 This Crock pot Pear Butter Recipe is one of the best ways to preserve an abundance of pears. Not to mention they make the perfect hostess gifts. 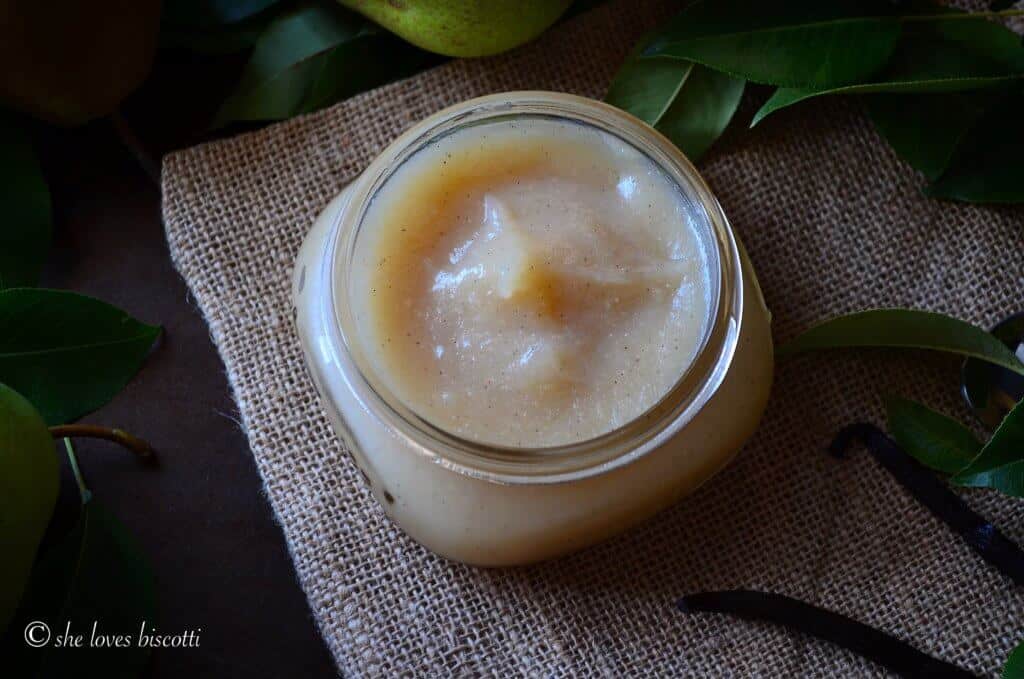 For most of my adult life, I never gave fruit butters any consideration. To be totally honest, I had a preconceived idea that fruit butters actually had butter in them (if you could see me now, I am blushing …) 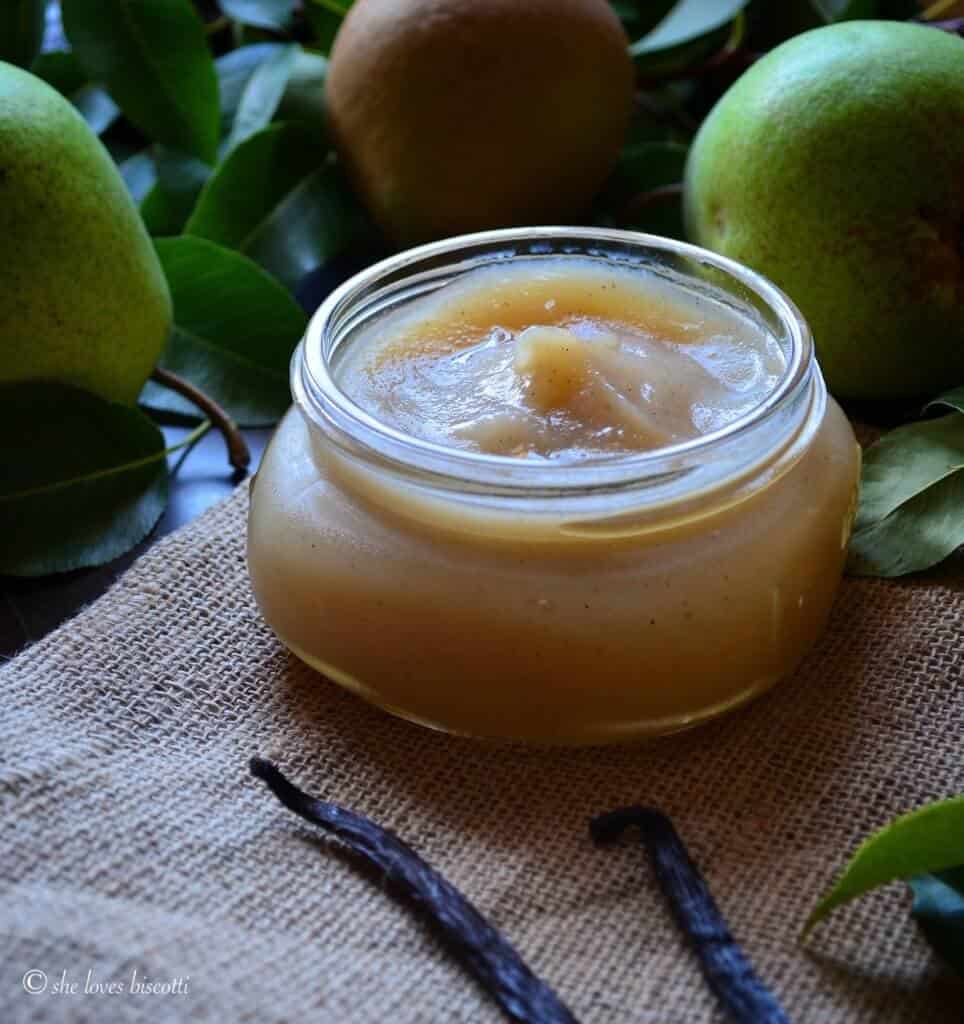 About a decade ago, I had a conversation with a colleague of mine who enlightened me on the subject of fruit butters.

And that is how my obsession with fruit butters began…

I started with this Easy Homemade Spiced Apple Butter, and this Crock pot Vanilla Pear Butter Recipe was the natural next step! I just recently published this recipe for Plum Butter which tastes out of this world!

What exactly is a fruit butter?

A fruit butter is a highly concentrated form of pureed fruit (apple, pear, plum, etc…). It has a smooth consistency and silky texture, which can easily be spread, like butter. Spices are often used to highlight the fruity taste and they are usually made without any pectin.

How is a fruit butter made?

Fruit butter is simply made by chopping fruit into chunks and cooking it so that it softens. It is then pureed and cooked again until all the moisture has evaporated and transformed into a smooth, silky fruit spread. Fruits butters can easily be made in a slow cooker. 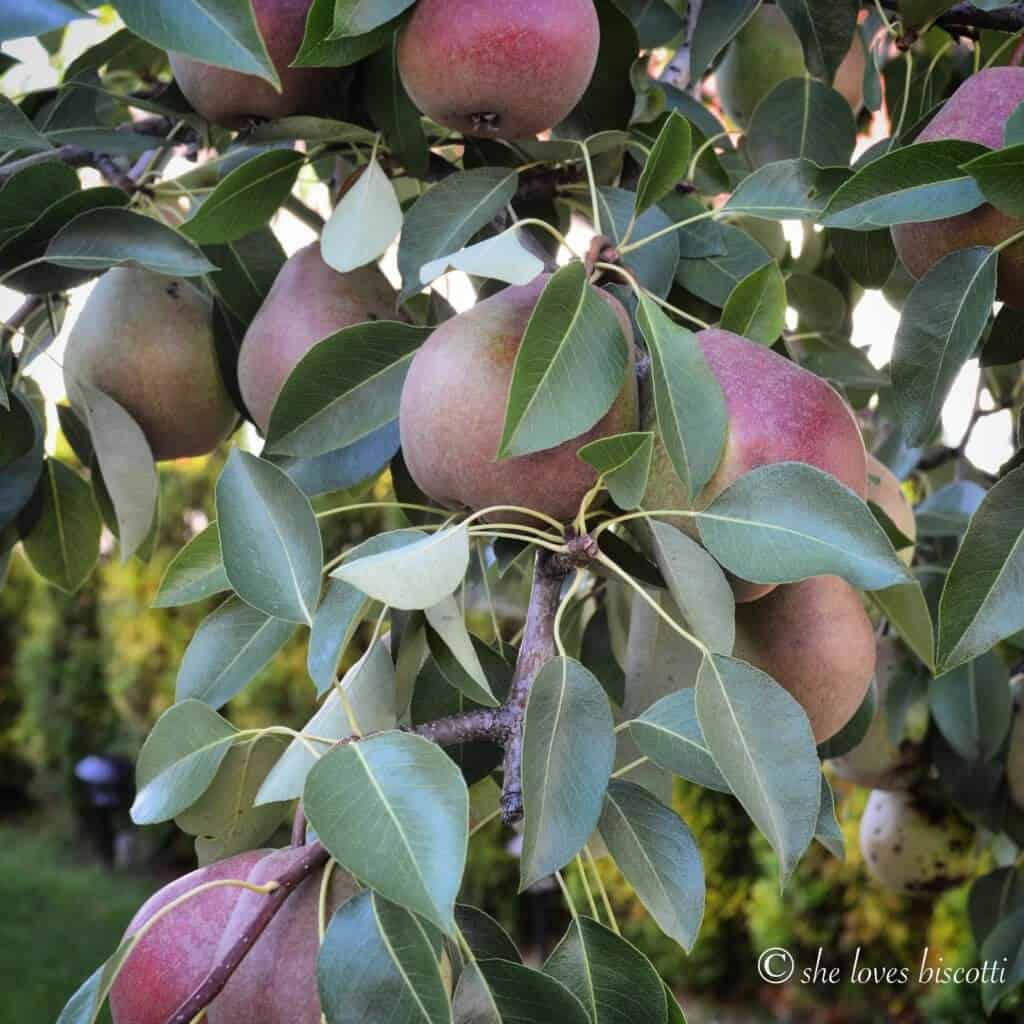 I have previously mentioned that I have a wonderful pear tree growing in my backyard that was planted by my dad. It truly is a privilege to watch the May blossoms slowly develop into actual pears.

A recent weather warning of thunderstorms and risk of high winds left us no choice but to go pear picking in our own backyard – we didn’t want to end up with pears splattered everywhere, blown around by the wind!

So we picked the pears… about 40 pounds worth!

Now, my dilemma. What to do with two bushels of freshly picked pears? I considered making this Almond Pear Tart. But there are only so many tarts one can make. I also have a recipe for a wonderful pear cake, but then again, that would only have used up three pears out of the two bushels that we had…

That’s the thing with fruit trees – the fruit ripens all at the same time, and then you are left scrambling, trying to find ways to use or preserve it for the long winter months.

So if you are wondering how to preserve pears, I have the perfect solution… make this perfectly spiced pear butter! It really is so easy to make in a crockpot!

The first thing we are going to do is give the pears a good rinse. Once that is done, we need to peel and core the pears. Feel free to use a variety of pears for this recipe. 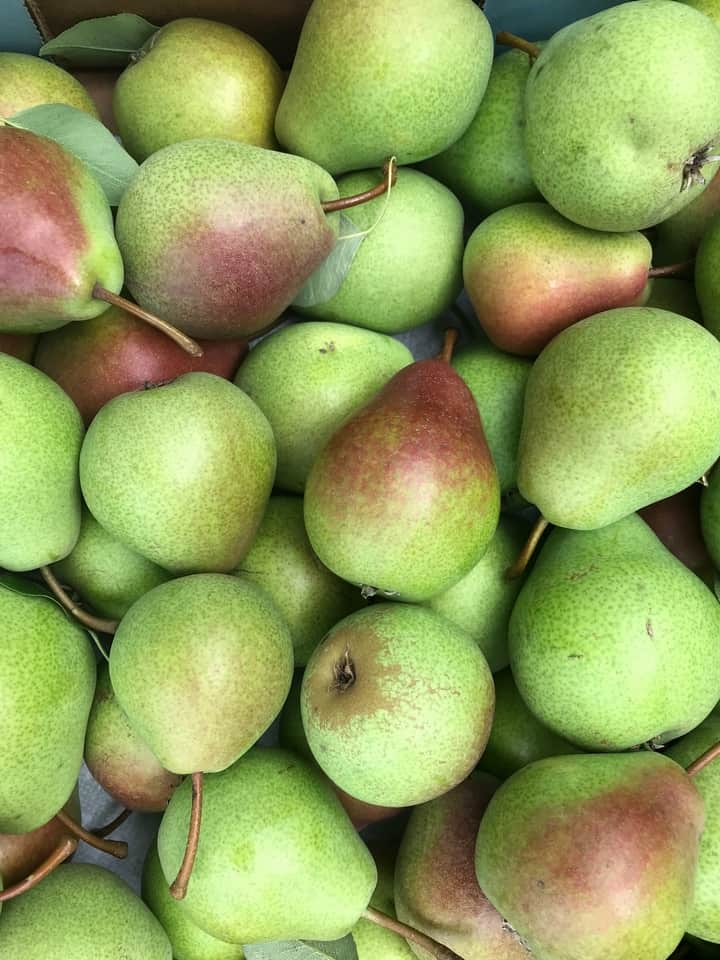 Pro Tip: Use a melon baller to remove the core of the pear. 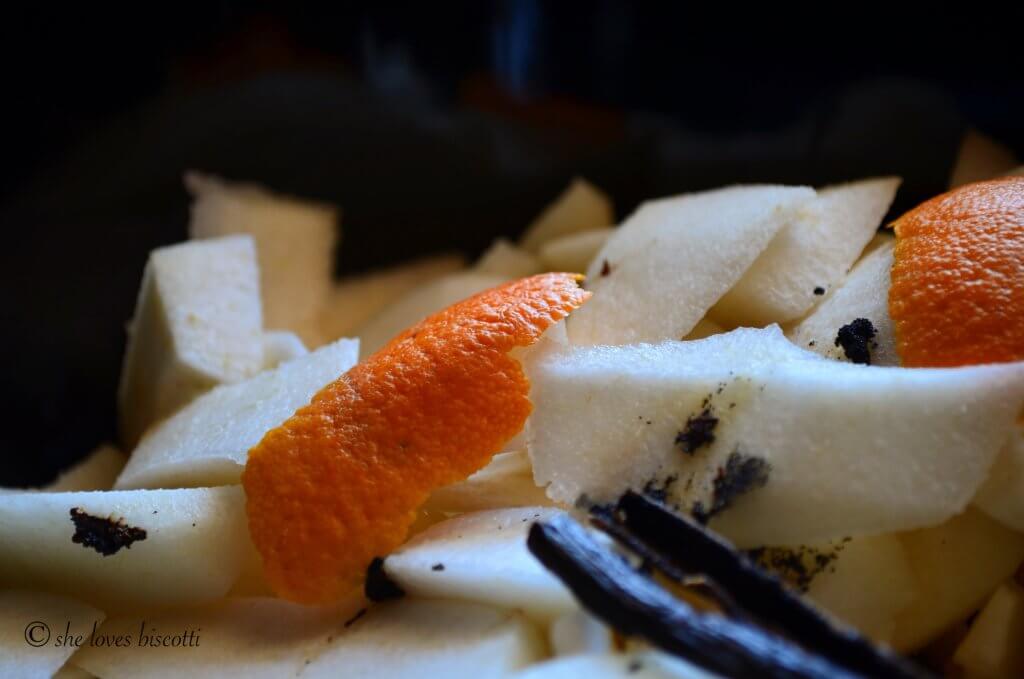 Next, we need to add the peeled and cored pears to the slow cooker along with a scraped vanilla been, some orange peel, a few tablespoons of brown sugar, orange juice and a little bit of water.

Pro Tip: The water is added to prevent the pears from scorching so it is important not to skip this addition. 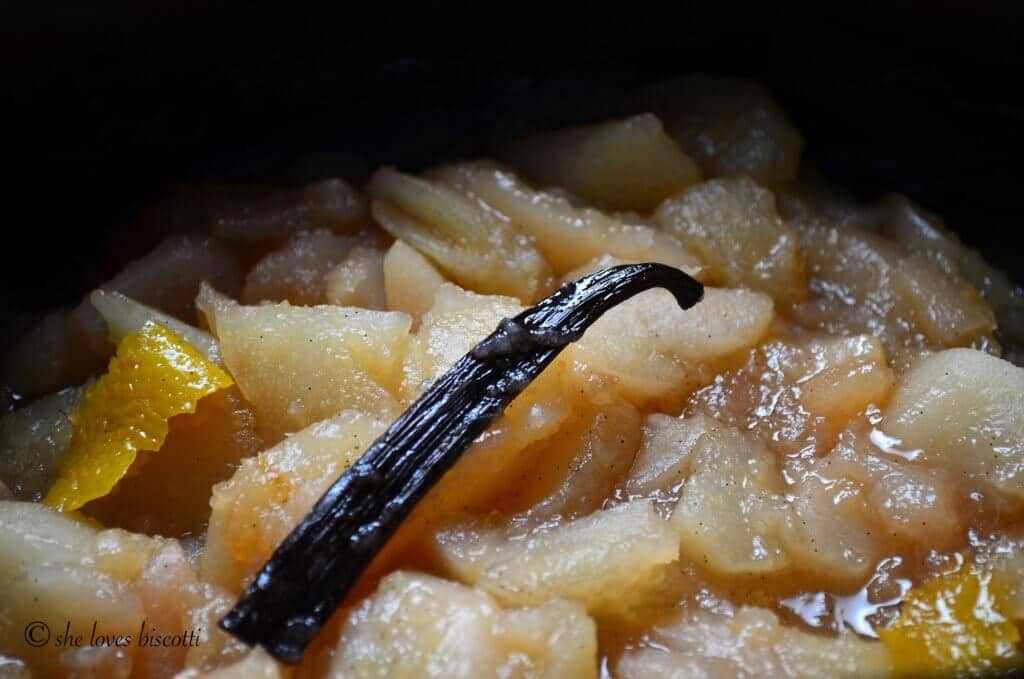 Set your crockpot on high and cook for 3-4 hours. The total time will depend on the ripeness and the type of pears. As soon as the pears have softened enough to be pureed, remove the vanilla bean and the orange peel.

With a handheld immersion blender, process the pears until smooth. You will notice that this is a very wet mixture. Alternatively, the cooked pears can be transferred to a food processor and pureed.

Next, cook it down until there is no liquid that seeps out when a teaspoon of the fruit puree is placed on a dish. 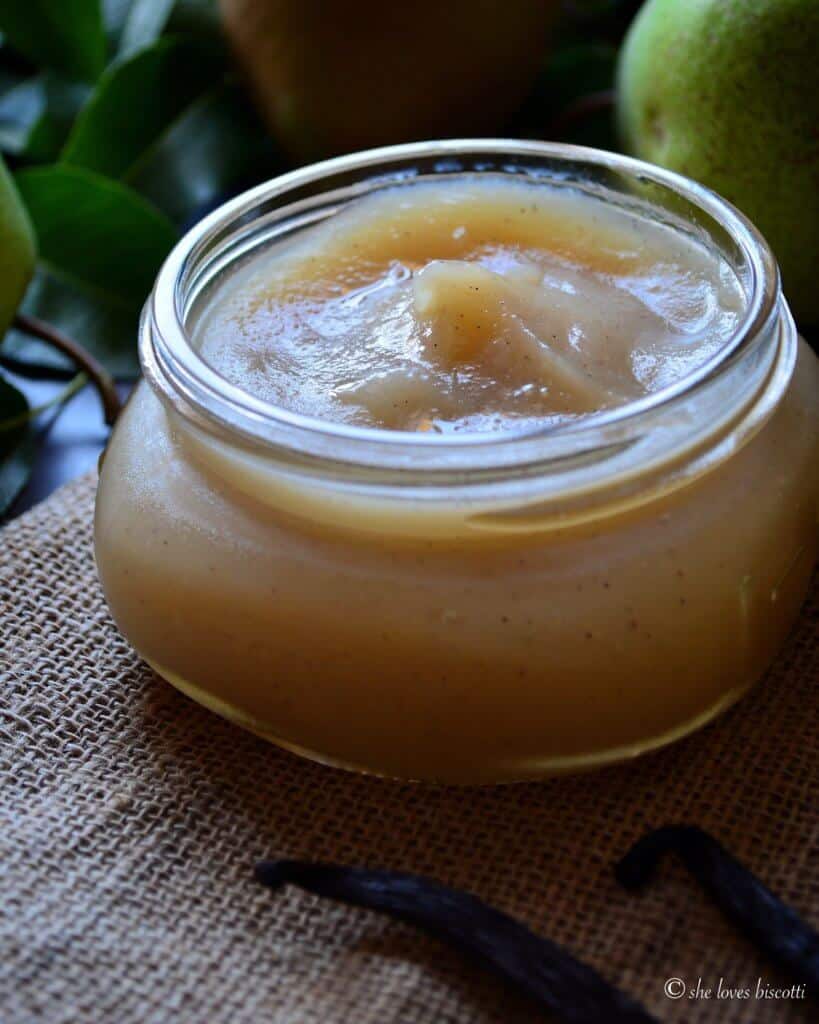 Nutrition Note: This pear butter can be a great fat-free alternative for butter. But remember, fat-free does not mean calorie-free. Moderation is key!

As I was looking for some fruit butter inspiration, I was surprised to see that some recipes actually had up to 4 cups of sugar added to 4-5 pounds of pear. I think that would be appropriate for a jam or jelly, but for a fruit butter? I’ll let you decide.

It’s definitely too sweet for me. I opted for just a couple of tablespoons of brown sugar, due to the fact that my pears were not yet fully ripened.

My daughter-in-law and daughter are just as obsessed as I am when it comes to fruit butters. And so they became my taste testers for this recipe. After some tweaking, we decided to simply enhance the flavor of the pears with some vanilla bean and just a hint of orange.

Just in case you are wondering, we tried adding different “warm” spices to the pears (cinnamon, nutmeg and allspice). As you probably know, spices have the wonderful ability to complement and add a little bit of depth to the fruit.

We felt the delicate flavor of the pear was overpowered by the spices, despite the fact that we used very little amounts. 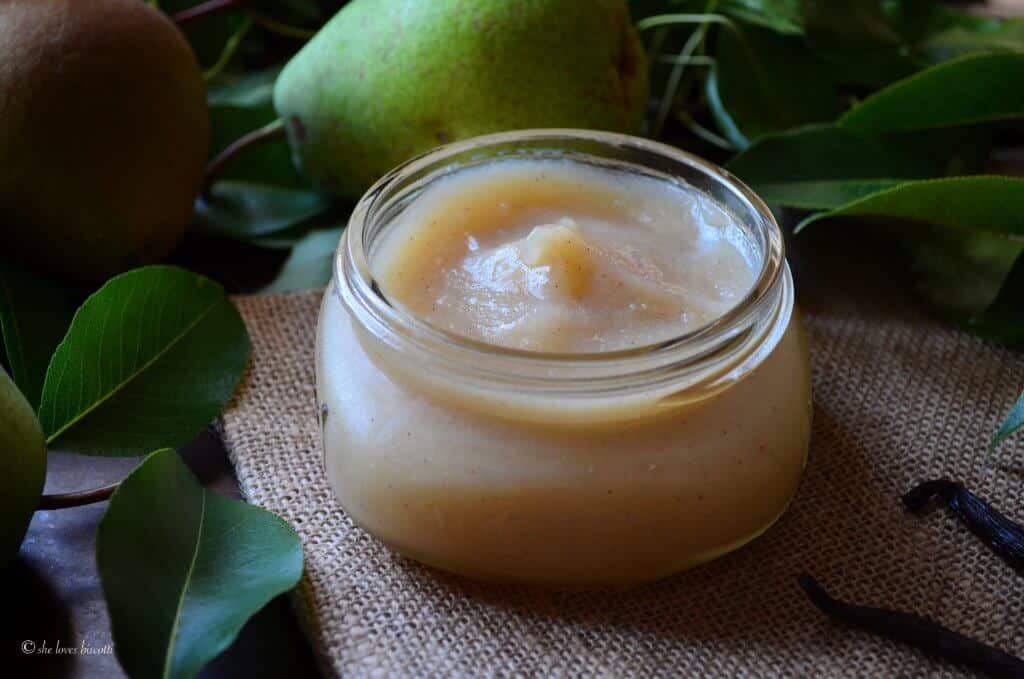 It really is one of the best ways to preserve an abundance of pears. Not to mention they make the perfect hostess gifts.

★★★★★ If you have made this Pear Butter recipe, I would love to hear about it in the comments below and be sure to rate the recipe! 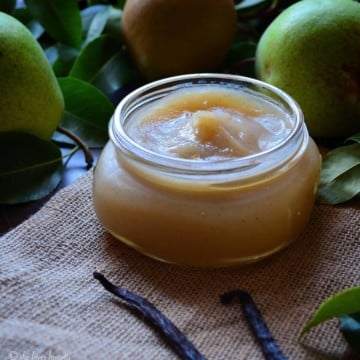 Total yield: 2 half-pint jars or 2 cups 1 serving = 1 tablespoon Please keep in mind that the nutritional information provided below is just a rough estimate and variations can occur depending on the specific ingredients used.  *recipe lightly adapted from food.com 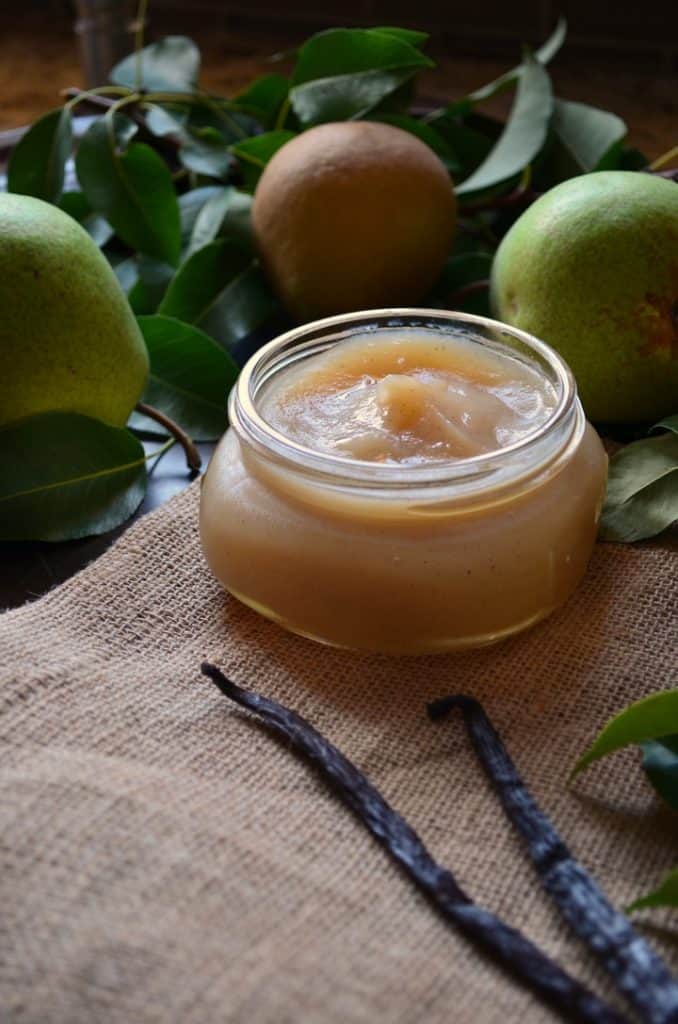 We use cookies to ensure that we give you the best experience on our website. If you continue to use this site we will assume that you are happy with it. Read moreOkNo