Ever had cinnamon rolls made with mashed potato? Once you try these soft & fluffy Potato Cinnamon Rolls, they will become your make ahead breakfast recipe for the weekend and special occasions.

Do you know that gut feeling you get when you come across a recipe that you know will be spectacular?

That’s the feeling I got when I came across this sweet dough recipe.

I got that exact feeling again when I came across this easy recipe for cinnamon rolls.

I was more than slightly intrigued when I initially read the list of ingredients for this recipe. Potatoes in cinnamon rolls! I then thought, why not right? Gnocchi is made with potatoes, and so are some rolls and biscuits. I couldn’t wait to get home and try this recipe!

How to Make Potato Cinnamon Rolls:

It all begins with mixing yeast, flour, sugar, milk, butter, eggs and the secret ingredient: potatoes. If you have one, use a potato ricer to mash your potatoes. Be sure not to overwork the dough.

Once the dough has rested and doubled, poke it gently with two fingers. If the indentations remain, you are good to go.

Punch down the dough.

Turn it out on a lightly floured board and let it rest for about 10 minutes. While you wait, you can get started on the cinnamon-sugar mixture.

Roll out the dough in a rectangle measuring 12 x 18 inches. As you can tell, mine is less than perfect. Brush with melted butter and spread the cinnamon-sugar mixture. I read somewhere that including a little bit of flour in the mixture will prevent it from “leaking”. I usually add about one heaping tablespoon.

This is such a nice dough to work with. Soft and a little sticky. Starting at the long end, roll it up as tight as you can, and then slice it.

I like to use my handy little dough scraper to cut through the dough. I don’t mind squishing the dough. If you want perfect slices, you can use floss or kitchen string. (Place string under the log and as you bring the two pieces of string across each other (on the top), you cut through the dough perfectly every time). A sharp knife can also be used.

Cut in half, then cut the halves in half, and then the quarters in thirds. I had to cut one section in four as it was slightly longer than the other ones. Vive la différence!

Okay, so now you pick up these wonderful little babies and place them ever so gently in a large baking pan (13 x 9 x 2 inches). Remember to grease or spray your pan.

Now, comes the hard part: waiting! Wait until the dough doubles in size.

Place in a preheated oven for about 30 minutes.

Not bad, eh? I probably should have rolled my log a little tighter. There’s my excuse to make them again.

The hardest part is removing the first piece 🙂 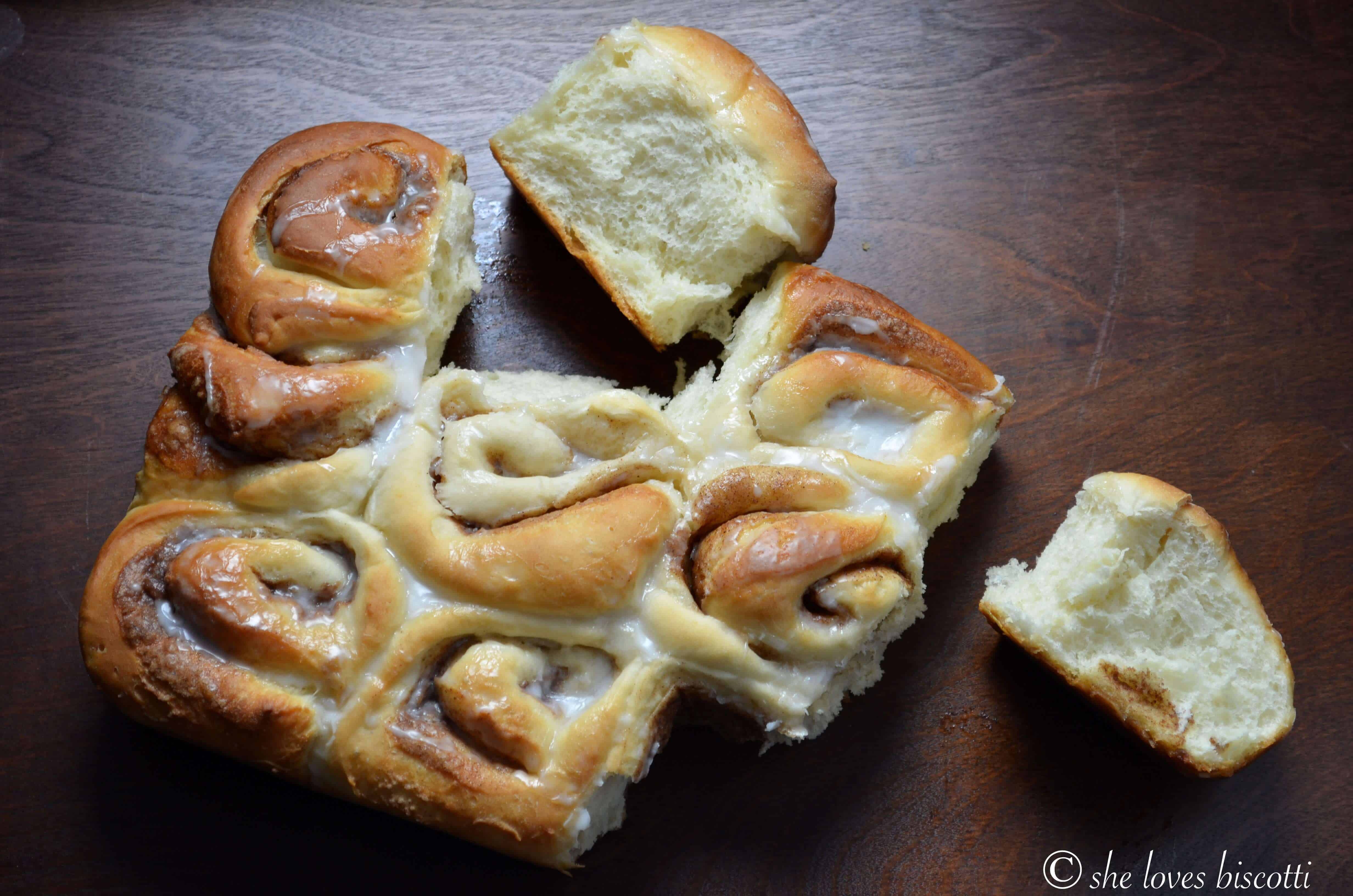 For those of you with touch screens, zoom into this picture…doesn’t it look soft and tender?

So, if you are like me, you would want to know about the magical culinary powers of potatoes.

I read that the starch in the potatoes (which is higher in Idaho or Russet potatoes) contributes to the structure of the dough, and holds more moisture than wheat flour.

And all of this is done without contributing to the development of gluten. That’s why the end product turns out to be light and tender.

As I mentioned in my popover post, there is chemistry in baking!

A few years ago, I bought a magazine from Better Homes and Gardens called “Cook’s Secrets”. I’ve adapted this recipe from there. Everything I’ve tried (so far) from this magazine has been spectacular.

If you are looking for the best make-ahead breakfast recipes for a crowd, this is the recipe for you.

Every time I make these rolls, I can’t decide if I have more pleasure making or eating them. What about you?

★★★★★ If you have made this recipe for Potato Cinnamon Rolls, I would love to hear about it in the comments below and be sure to rate the recipe!

Icing is optional: I like to combine a 1/2 cup of icing sugar with about 1 tablespoon of milk. Whisk until smooth and glaze the rolls before serving.
Make it ahead:Once the rolls have been cut and placed in the pan, they can be refrigerated overnight. Remove from fridge and let stand at room temperature (covered) for about 30 minutes before baking (as per instructions). *adapted from recipe in Cook's Secrets Magazine