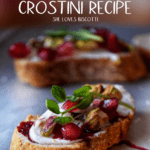 This whipped Ricotta Crostini recipe with pomegranate is elegant, sweet/savory, and, like all Italian crostini recipes, tender on the inside and crunchy on the outside. A must-try if you like easy and tasty Italian appetizers. 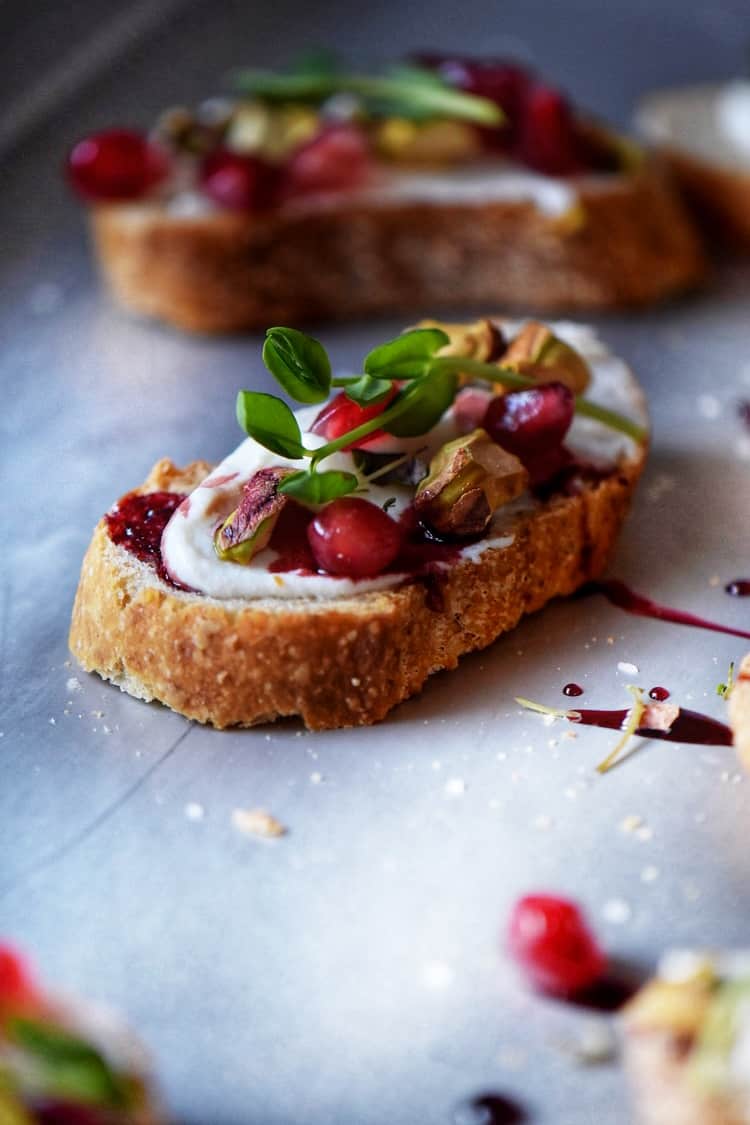 I am a big fan of great appetizers.

When you have friends over for food, wow them when they are at their hungriest – that’s what I always say! 😉

And I was so glad to add this whipped ricotta crostini recipe to my arsenal of appetizers. 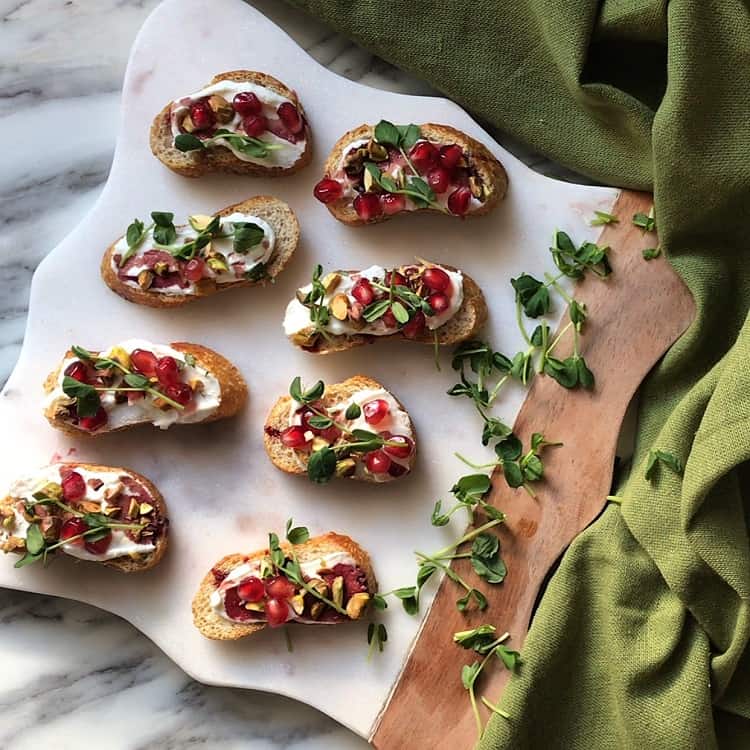 I think it’s safe to say that the philosophy behind Italian cooking is that a final dish is only as good as its individual ingredients. This is especially true in the case of this Whipped Ricotta Pomegranate Crostini Recipe since many of the ingredients you’ll need to make it will be eaten raw. Invest in high-quality ingredients for a high-quality recipe!

How to make ricotta crostini 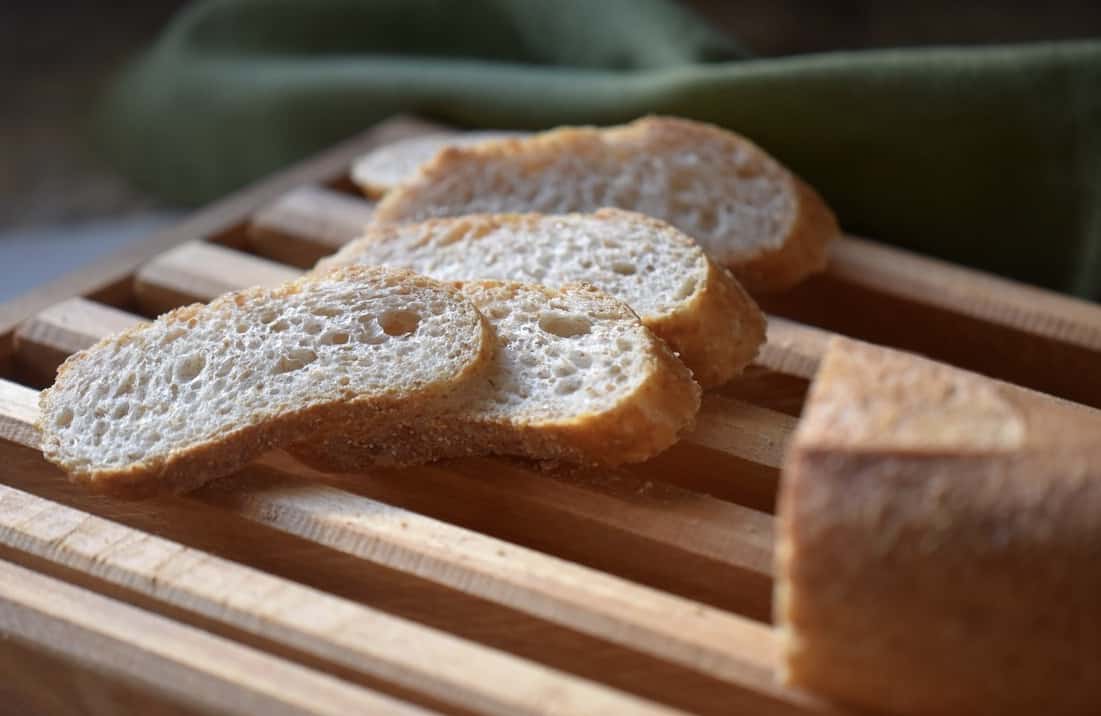 Once your baguette is sliced, brush avocado oil on it, then toast, about 5 minutes per side. I prefer using avocado oil in this particular crostini recipe rather than olive oil, my usual go-to because of the subtle flavors of the avocado oil complement the recipe is much better. When your bread is done toasting, brush it with thyme. Cut up some of the extra thyme leaves into very small pieces and set aside – we will be using them as garnish later.

Roast your pistachios. I love the difference that roasting a nut makes – it really brings out the flavor, and in this case, the color! Pistachios are a lovely, happy green that is much needed in these wintry Montreal conditions. Toast them for just a few minutes. Set aside.

Get your ricotta and whip it with a blender for a few minutes, until it is light and fluffy. Set it aside for now. 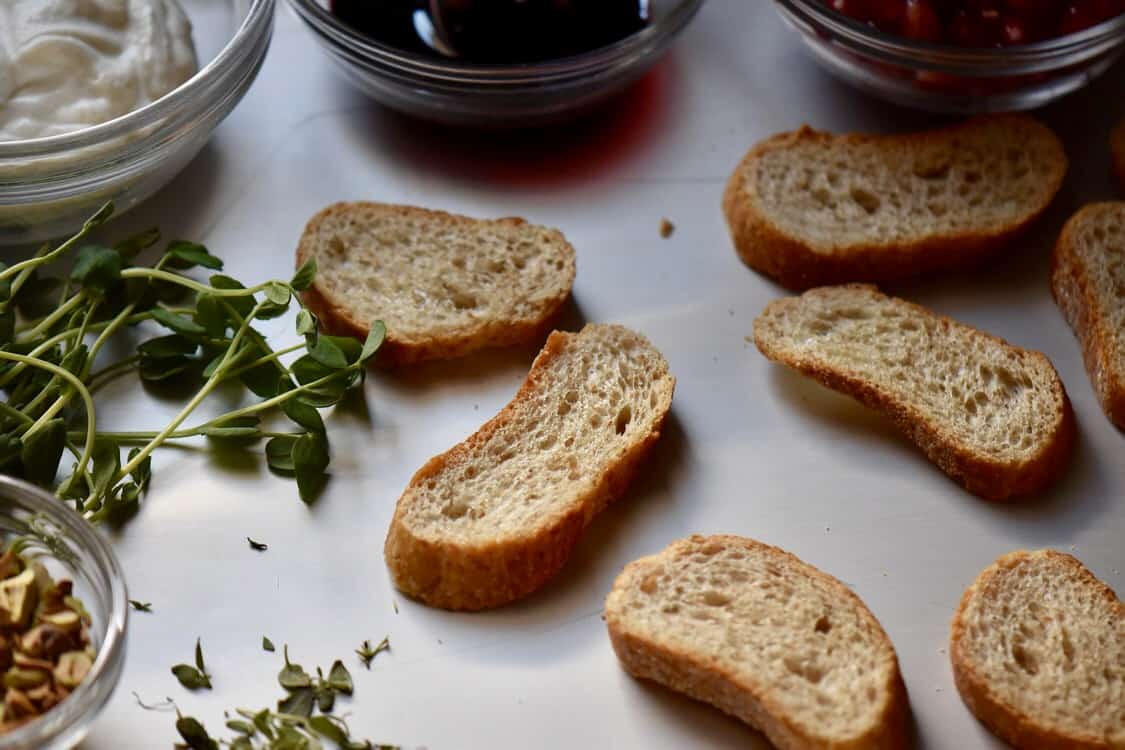 Assembly time! Take your thyme-brushed toasted baguette, top with some whipped ricotta. Top the whipped ricotta with some of the chopped thyme leaves you prepared, the pomegranate reduction, pomegranate arils, roasted pistachios and finally, the pea shoots. Finish off the crostini recipe with a touch of flaked sea salt. 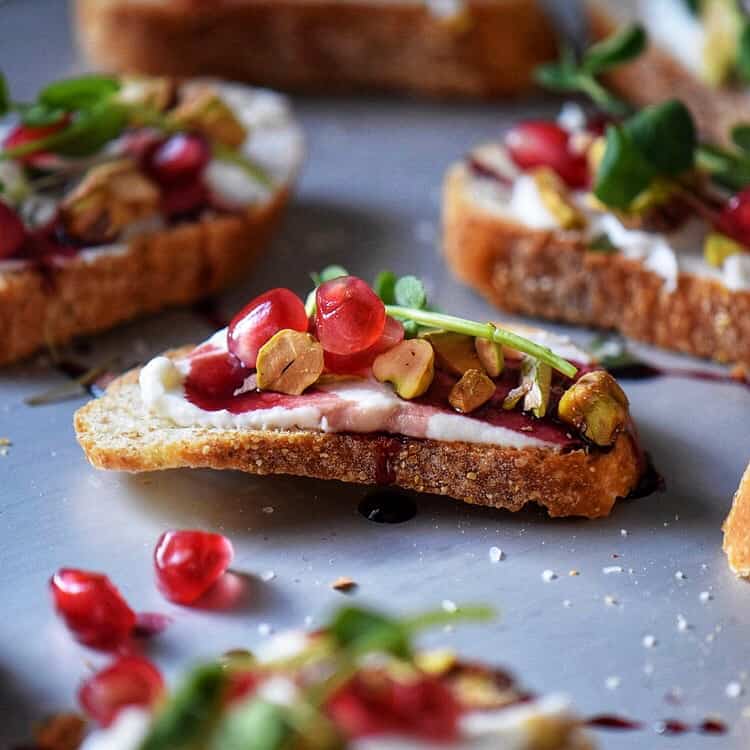 Now, reading through this crostini recipe, it might seem like you are prepping a lot of different ingredients in tandem, and that would be true. But one of the best things about this crostini recipe is how almost all of those ingredients can be prepped the day before, making assembly on the day of a big get-together as quick as can be. What can be assembled ahead of time? The baguette, whipped ricotta, the pomegranate reduction, and the roasted nuts.

I love the combination of different textures in this crostini recipe – the crunchy baguette and roasted nuts are offset by the soft, pillowy ricotta. I also love the combination of flavors in the recipe: the slightly sour pomegranate arils and the tangy pomegranate reduction combine with the savoriness of the thyme and the saltiness of the – ahem – salt, giving the finished product a well-rounded taste. 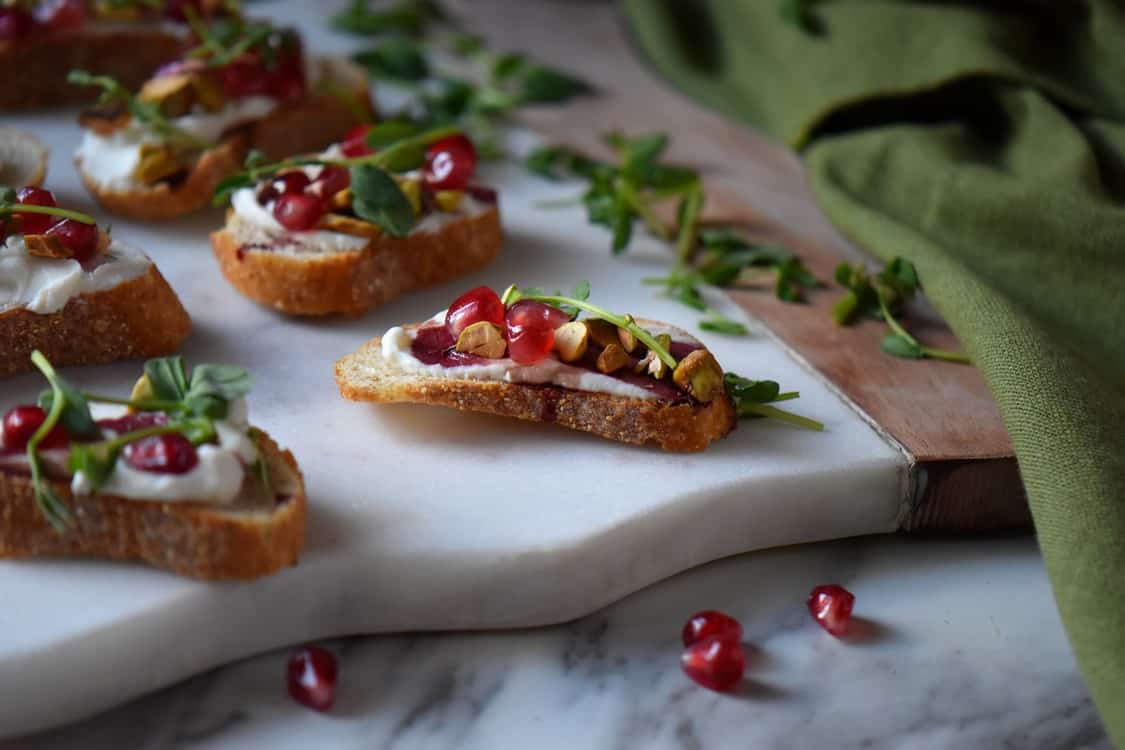 I also just love the look of this crostini recipe – there is something truly beautiful about putting something together with such vibrant greens – the pistachios and the pea shoots – combined with such vibrant reds – the pomegranates and the pomegranate reduction. Since pomegranates become available in the winter here in Canada, the bright cheeriness of the crostini is especially appreciated; it makes the gray, snowy days more bearable. And all that red makes it just perfect for Valentine’s Day, too!

Try this Whipped Ricotta Pomegranate Crostini Recipe at your next get-together, and I guarantee that this delicious little appetizer will be the talk of the table!

What type of bread should I use for my crostini recipe?

Use a fine-textured bread that is small and wide, like a baguette.

What is the difference between a bruschetta recipe and a crostini recipe?

They share many similarities! The main difference is that a larger piece of bread is used for bruschetta and that the bread is grilled, not toasted. That’s why it’s called “bruschetta”, as a matter of fact – this comes from the Italian “bruscare”, which means to roast over coals. People often associate bruschetta with garlic and diced tomatoes, but really, like crostini recipes, they can be topped with a wide variety of different things. If interested, here is my go-to tomato bruschetta recipe.

I had the privilege of attending a culinary event sponsored by POM wonderful. It was described as “a fresh and fun culinary event – POP-UP with POM WONDERFUL.” I got to experience the tastes and textures of cooking with pomegranates, and I was so thrilled to be there!!

The event was hosted by Pom and the animators were Andréanne Martin Dt.p.  (of NutriSimple) and Chef Martin Patenaude. Chef Martin made a few recipes that incorporated pomegranates in some crucial way, and of course, this Whipped Ricotta Pomegranate Crostini Recipe was one of the recipes featured. After the demonstration, all of the attendees had the chance to make – and, of course, sample – each of the recipes. Delicious! We were sent away with lovely recipe cards and a swag bag.

This Whipped Ricotta Pomegranate Crostini Recipe was by far my favorite among those demonstrated, but there are some others that I’m sure I will be sharing with you soon (did someone say brownies?) – stay tuned! Overall, though, it was a fantastic event and I had heaps of fun.

As you know, I love pomegranates and I was so happy to be surrounded by foodies who felt the same way! Pomegranates are not only healthy but also great to use in recipes. You probably know that I have already sung the praises of this wonderful fruit in this Spinach Pomegranate Winter Salad and Italian Fennel Salad. If interested, I have also shared my favorite way to open a pomegranate in this pomegranate video tutorial.

What you see here is basically Chef Martin’s recipe – I didn’t deviate from this crostini recipe, because it had all the elements required for a great crostini recipe. The only change I made was whipping up my ricotta. I’ve already talked about the wonders of whipped ricotta in my recipe for Whipped Ricotta Parfait, so I thought it would be great to revisit it and use it for this crostini recipe!

Try this Whipped Ricotta Pomegranate Crostini Recipe at your next get-together, and I guarantee that this delicious little appetizer will be the talk of the table!

★★★★★ If you have made this Ricotta Crostini recipe, I would love to hear about it in the comments below and be sure to rate the recipe! 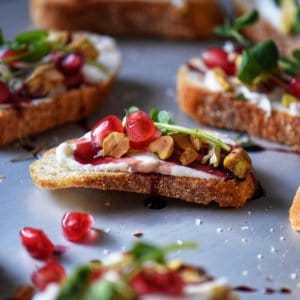 To make a simple pomegranate reduction:

To make the crostini:

To make the whipped ricotta:

Leftover pomegranate reduction can be kept in the fridge for about 1 month.  1 serving = 1 crostini Please keep in mind that the nutritional information provided below is just a rough estimate and variations can occur depending on the specific ingredients used.

Disclosure: I was provided with a swag bag with product at the end of the event.  I did not receive any monetary compensation for this post. Views and opinions expressed in this post are entirely my own.